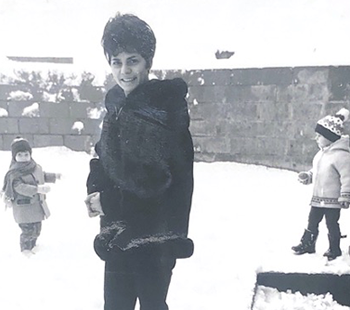 As an immigrant, Rosetta faced prejudice and adversity every day. Not being able to speak a word of English, and with little means her early years were filled with fear and the unknown. The challenges were many and yet Rosetta persevered and understood that she needed to grasp the English language quickly and learn how to live in Toronto. She saw this as vitally important in that she knew that she had to support her parents as they also adapted to the Canadian way and were themselves struggling to learn English. Rosetta found strength in her added responsibility to support her parents. She knew that educating herself and learning to speak the English language would ease the challenges being faced by her parents and family. While adversity challenged many Italian immigrants,  hard work and family were core to their survival. No different was that for Rosetta. The only difference in her case was that she embraced the challenge of not knowing the language and learned it quickly which became a core strength to her as a woman, to her parents and now her own family. I am proud of my mother-in-law Rosetta and highly respect her embrace of the English language and who today sees education as a way to a better life.  Her stories continue and at the foundation of all is a matriarch we call Nonna Rosie.
-Sandra, daughter-in-law

Something I began to notice about my Nonna Rosie when I would call her is she would never answer the platitude “What did you do today?” with “Oh nothing,” as most people do. My nonna Rosie would itemize her day to me: Well I woke up and had some toast, then I got dressed and washed the floors, then I called Antonietta and then I…On and on she would go. I began to feel like this was a woman who took pride in her day and I felt so inspired by it that I find myself saying the same types of things when people ask me what I did. Our phone calls are bright and filled with details in both English and Italian…..as long as I don’t call at 4:30 when The Young & The Restless is on.
-Ivana, granddaughter

When my Nonno Ivano passed away it was devastating, especially for my Nonna Rosie. They had just celebrated 60 years of marriage together. My Nonno’s sister Adelina came from Civitanova for the funeral and to stay with my Nonna for a few weeks. Inevitably the day came that Zia Adelina had to return to Italy and Nonna would have to be alone. I offered to sleepover for as long as she needed me to but she told me “No. I have to learn, even if it is hard.” She is so wise and so brave.
-Carla, granddaughter

I was a severe asthmatic as a kid and when I was about 7 years old, my mom learned that I was allergic to ragweed. Not really knowing what that was, she commandeered my dad Ivano, my zio Marino, zia Iolanda and my cousins (who we lived with) to pull anything that looked like a weed from our lawn in an effort to get rid of ragweed.
-Ferdinando, son