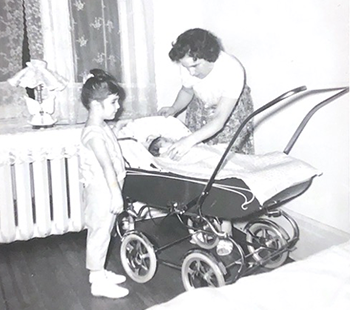 I had a project to do in grade 6 and it was based on something that symbolized a country or city. I was partnered with my Friend Jamie. After School one day I went to his house to complete the project, however, I did not let my father and mother know where I was. We got carried away, and lost track of time. It was late, around 9 pm, and I decided to walk home which was about a half hour from my home. Nonna had called the Police to report me missing,  and even went out in the neighbourhood to search. She was convinced that I would be found. Her emotions were angry & wishful at the same time. When I arrived home the police were at the house and when I stepped foot in the house my mother had this rage, like she wanted to kill me, and at the same time hug me. After the police left the punishment started. Wooden spoon beatings and she tied me to the furnace in the basement for sometime. It was well deserved, however my Mother never believed once I was missing, but rather irresponsible. She was so strong & determined she would find me. I love her dearly, because of her bravery & courage she displayed then & still now.
-Giosue, son

When I was 8 years old, I was playing outside of the townhouse complex we lived it. We all had a front yard and did not have any fences separating each home. It was like an open field and all kids played on everyone’s yard. I was playing at the very last townhouse and at the edge of this home there was a drop of maybe 5ft to the ground. Some bully pushed me off the edge and I hurt my arm badly. When my mother saw my arm she was so angry it scared me. She put it in a sling and took me to the bully’s house to speak with his mother. In broken English she explained what happened and why it was wrong. She was calmer after this exchange and I felt better.
-Rosanna, daughter

When I came back to live in Toronto permanently in 1972, after living in Rome with my Zia Anita for three years, my parents wanted to enroll me back in school. We encountered difficulties with th Toronto Board of Education. They explained to my parents that I needed to be put back a year of schooling, due to the Canadian curriculum. My parents were very upset, especially my mom. When we met with the Italian Consulate, my parents showed them my Italian Scholastic  Reports, which clearly explained the Italian Curriculum was ahead. Then my Mom, became my Advocate and insisted that her daughter who had higher education not be put a year behind. She absolutely refused this notion. After hearing my parents, especially  due to my Mom’s persistence, they granted my parent’s the request after a few months. Thanks to my parents arguments, due to my Mom’s Femmina Forte, I was put in the proper grade.
-Teresa, daughter

I just remember Nonna always having energy and love for us, taking care of us early mornings, making uovo sbattuto while I was still asleep at the table, always making sure we were full and letting us play sometimes rough in her house with no issue. She just wanted us happy. And how much energy that took. Now I just think she was nuts 😂
-Adrian, grandson

One of the memories I loved with Nonna was when she would make me homemade rice crispy squares. She knew how excited I would get so we used to first go to the park at the corner and then after, walk to the plaza on Finch and she would buy rice crispies and marshmallows. I remember on our walks she would teach me Italian and that’s actually where I learned to understand Italian. We’d get home and she would make the rice crispies for me right away. She always made sure we were having fun and I really miss those moments with her. You guys know how much I love sweets so that was a SWEET memory with nonna.
-Michael, grandson

Some of the memories I loved with Nonna were when she used to let me sleep in and make me my favourite breakfast: toast with peanut butter and jam & latte cafe. After breakfast she would take me to her room and braid my hair with 2 elastics and a spray bottle of water, while telling me in Italian that my hair should be out of my face so that everyone could see my beautiful face. After doing my hair so beautifully, she would then take me to the park by her house to play, even took us all to the community centre sometimes. She would watch Young and the Restless all the and one day we watched it together and she explained the show to me, play by play, and it ended up being something we watched together all the time after school. We loved Victor Newman so much! These are some of the very many beautiful and femmina forte moments with Nonna.
-Olivia, grand-daughter