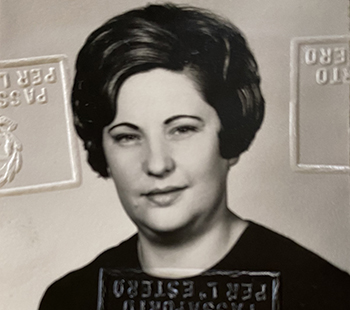 Maria Antonietta Chiaradia (née Ros) was born on June 13th, 1935 at home in Bannia di Fiume Veneto, Pordenone, Italy. In 1956, at the tender age of 20, Maria immigrated to Canada to marry her childhood sweetheart.

Maria’s journey began like those of many postwar Italian immigrant women, with paperwork to complete and a train ride (often three to four hours in length) to a port of departure, in Maria’s case, Genova.

The paperwork typically had to be completed in Rome. Stay restrictions were often imposed: candidates needed a sponsor, concrete work contract, and a marriage proposal to be fulfilled within six months of arriving in Canada. Marriages were commonly planned before departure, and church weddings usually performed within one month of arrival in Canada.

Maria arrived in Genova on November 15, 1956 and after two days of waiting nervously (on the morning of November 17,) she boarded the SS Constitution bound for New York City. Maria’s mother and sisters were loath to say goodbye to the youngest of their family, and cried profusely on taking their leave of her. Looking back on the episode, Maria reflects that, “Quando sei giovane non pensi tante cose (When you’re young, you don’t think of such things too deeply”).

Alone and forlorn, Maria handed over to the crew and stored on board both her piece of luggage and the trunk carrying her “corredo”. “The horn blew, the gates were shut and I cried. I would have stepped off the ship if I could have.” Maria wasn’t afraid of the voyage; as a solo voyager whose contact with others was minimal, she was simply sad and lonely. As Maria puts it, “C’erano altre ragazze che non volevano che io stessi insieme a loro (There were other girls who didn’t want me to be with them).”

After a turbulent, seasickness-inducing transatlantic passage, Maria arrived in New York City in the early morning hours of November 28, 1956, with her documentation and promissory note of marriage in hand.

Being chaperoned was protocol for unmarried women landing in North America at that time. Maria and the other single women were escorted to what Maria described as a “special train” because it held only (those) immigrants destined for Toronto. The train departed at 8pm and arrived at Union Station at 7am the next day.

On December 22, 1956 – within one month of arriving in Canada – Maria married her betrothed, Diano (Mario) Chiaradia. Women immigrating to Canada from Italy in those years typically came for one of two reasons: to find work or to fulfill a promise of marriage. Maria had achieved the latter.

“Da sempre ho conosciuto Diano (I have always known Diano).” Maria admits that Diano loved her more than she loved him, yet their marriage of 62 years produced a son (Renato), a daughter-in-law (Paola) and two deeply-loved grandchildren (Siena and Stefan).

Over the years Maria developed a strong circle of Italian friends and family. However, she missed “her people”, and every letter received from Italy provoked a bout of crying.

Unlike some of her fellow immigrants, Maria quickly accepted the Canadian grocery-shopping experience and neither complained about it nor compared it unfavourably to that of Italy. She first shopped at the original Longo’s location at Yonge and Castlefield, where a chicken for soup stock could be purchased for 25 cents.

Within five months – in early May, 1957 – Maria found work. She was variously employed as a clerk at a dry cleaner, on an assembly line at a toy factory, at a wool factory (that in her experience was less welcoming to Italians), and at a Canadian Tire store.

During her first five years in Canada, letters were Maria’s only connection to her homeland (means of correspondence). Then, for the first time, she was able to return home to Italy.

While Maria embraced a new land, a new home, a new name and a new language, her longing for her homeland never abated: “Desideravo sempre ritornare in Italia.”