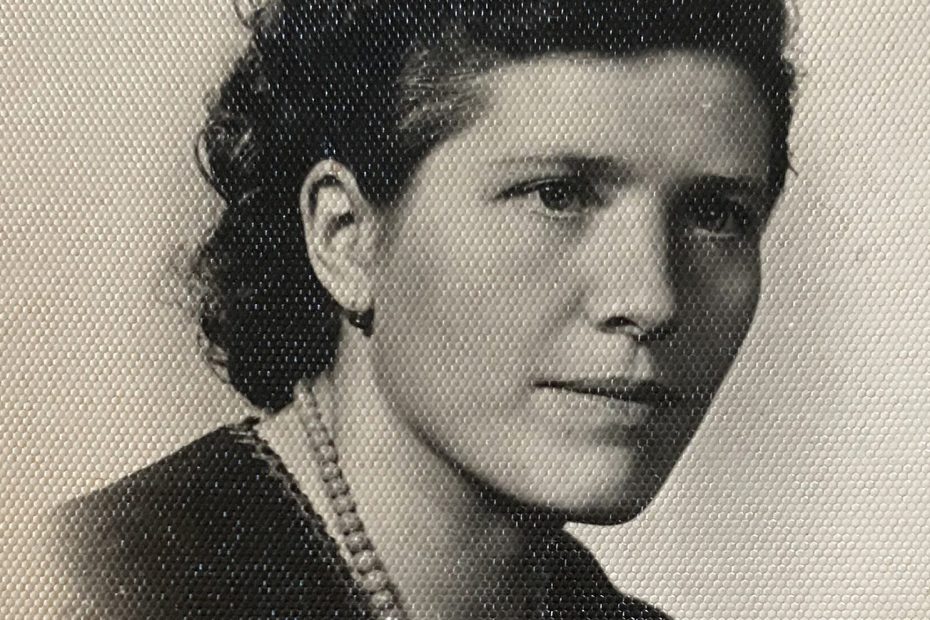 as told by her daughter Lillian Libralato née Pancino

Giulia was already very familiar with Canada before deciding to immigrate. Decades prior to her own departure from Italy, in the early 1920’s, her father had travelled to Timmins, Ontario in search of work in the mines. Her brother Giulio, one of many who left Italy immediately after World War II, was of great help to Giulia and her family when the time came for her to immigrate. Sponsorship and home security, often arranged by family or friends, were both considered essential on arrival to a new place.

The Babuin/Pancino family was dirt poor; leaving for a new life required doing so in the most cost-effective way possible, so it started with a bumpy train ride to the port of Le Havre, France. Then on July 25, 1949, alongside her husband Enrico and their two young children in tow (Liliana, age eight, and Mario, age six) – 3rd class tickets and two suitcases for a family of four – they set sail from the port of Le Havre, France on the Cunard White Star Limited Scythia.

Even in midsummer, the North Atlantic bared its teeth. After a challenging voyage of some 10 days, their vessel landed in Quebec City. The odyssey continued by train to Union Station, Toronto. What Liliana most vividly remembers is “a long train ride with wooden seats and strange-shaped bread.”

At Union Station, they were greeted by famiglia and were filled with gratitude for familiar faces and sponsorship. That day also brought a new and wondrous food experience: bananas! Liliana and Mario saw and ate this exotic fruit for the first time. To this day, Liliana continues the daily ritual of eating a banana.

English was a new language they needed to quickly learn and understand. The family was initially and naturally confused by the profusion of “Sale” signs in Toronto. Why was “sale” (“salt” in Italian) so ubiquitous, and why was it so important to announce its presence everywhere?

Giulia and her family found a flat which consisted of a few rooms and a shared bathroom, settled in, and called it home. Sharing a bathroom – and sometimes bathwater – was a common experience.

Almost immediately, Giulia found work at Tip Top Tailors (near Toronto’s waterfront). As a trained couture seamstress in Italy, Giulia derived satisfaction from working there, sewing uniforms with many other immigrants for whom, in many cases, English became the common language. The Tip Top factory thus became Giulia’s language classroom: it was there that she learned to string together a few sentences in English.

Adaptation was everything and adapting was crucial in these early years of Italian immigration. Thus, Liliana became Lillian. Eight years old and tall for her age, Liliana should have been in Grade Two. Instead, she was placed in the Grade One class at Dovercourt Public School. Liliana remembers feeling shock and awe by being pressured to integrate into her new environment which included anglicizing her name and symbolically/reluctantly removing her pierced earrings.

The curiosity of Liliana’s peer group about the jewelry that dangled at the bottom of her ears went beyond mere inquisitiveness. They also took it upon themselves to judge and correct: “English girls don’t pierce their ears.” Clearly a strong desire to belong and make friends ruled the daily life of an eight-year old immigrant girl in 1949. Lillian didn’t wear earrings again until her daughter’s wedding, and they were clip ons.

Like many other immigrant children, Lillian and Mario became interpreters for their parents. However, their parents were not too old to acquire new habits. Giulia learned to smoke because it was fashionable for women to do so at the time. The large front veranda of the home that she and Enrico had purchased on Delaware Avenue about a year after arriving in Toronto became an oasis for evening relaxation and indulging Giulia’s newfound pastime.

As the family gradually settled and became accustomed to their new environment, they took it upon themselves to assist more recent Italian immigrants. Their home became a hub for boarders (“i bordanti”, Italian/Veneto slang) and dinners. For those who had just arrived from Italy and needed a place to sleep or food to eat, the Pancino home on Delaware was a prime and popular destination. Communal dinners of eight to ten on any given day were not uncommon.

Giulia became a mother for a third time, this time in Canada in September of 1951 to her ‘figlio Canadese’ Sergio who learned ‘l’italiano a tavola, nella cucina’. Giulia went on to become a cherished nonna to nine grandchildren and a bis nonna (great) to five, now nine great-grandchildren, but the value and comfort of famiglia that she and her husband Enrico displayed in welcoming paesani into their home is an equally treasured part of their enduring legacy.